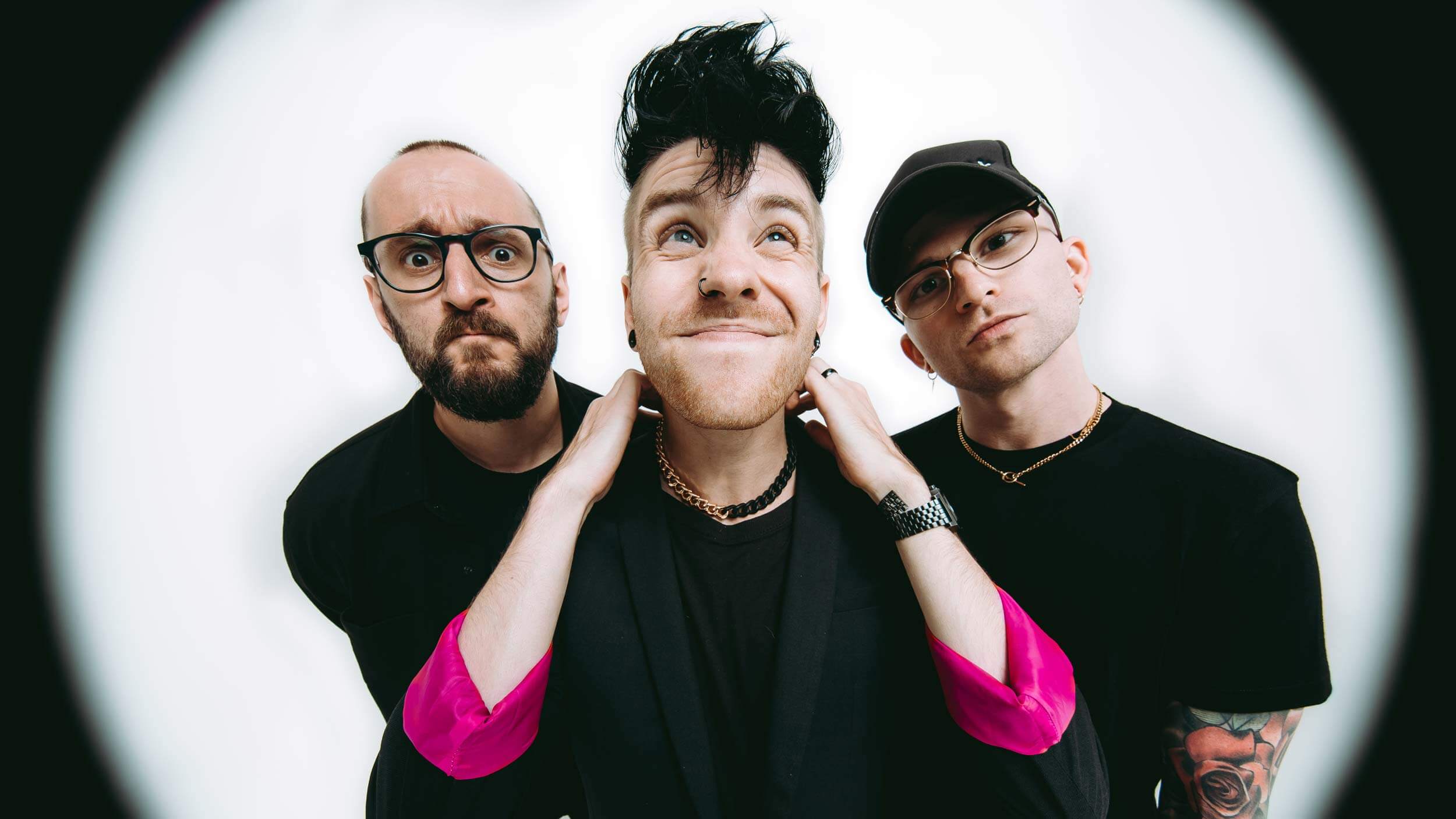 International pop-rock band As It Is — Patty Walters, Ronald Ish, and Alistair Testo — burst onto the scene with the Never Happy, Ever After in 2015 and followed with 2017’s okay. In 2018, they returned with conceptual and cinematic The Great Depression. The band boldly and ambitiously reimagined the entire album and released the songs as a series of four EPs in 2019. Having experimented with and perfected their blend of pop, punk, and rock over time, As It Is have truly found their groove with their fourth album, I WENT TO HELL AND BACK (Fearless Records). The new album came to life during a period in which each and every member questioned their life choices and wrestled with a world in a constant throng of chaotic uncertainty. The band also shifted to a three-piece lineup. Ultimately, these 14 tracks, including the anthemic singles “IDGAF, “ILY, HOW ARE YOU?,” “I LIE TO ME,” and “I MISS 2003,” are powerful, playful, and fearlessly chase the unexpected. It’s the sound of a band still having fun – but they had to fight for it. It’s a sprawling collection of songs that explore the confusing, conflicting emotions of the past two years. Having garnered a cumulative stream tally nearing 130 million worldwide, and with global press praise from Rock Sound, Upset, Alternative Press, Idobi, Outburn, and beyond, As It Is are ready for their moment.

“It’s so easy to make a safe record,” starts Patty Walters. The As It Is vocalist knows full well that it’s a bad business decision to gamble your career on an experimental record “but artistic freedom is why this is exciting,” he argues. “We didn’t start a band to create a company and look at spreadsheets. We do this because being in a band is fun.”

‘I Went To Hell And Back’, the new album from the Brighton-based alt-rock group, might have come to life over a two year period where each and every member questioned their life choices and wrestled with a world in a constant throng of chaotic uncertainty, but the band’s fourth album couldn’t sound more excited. The fourteen tracks are powerful, playful and fearlessly chase the unexpected. It’s the sound of a band still having fun – but they had to fight for it.

Walters formed As It Is in 2012 with “no expectations and very few ambitions. We were just hoping to have some fun and be part of the thriving punk scene here in Brighton.” Nine years later and the group are adored players in a global scene. “I’m so proud of the band we’ve become.”

Their first two records (2015’s ‘Happy Never, Ever After’ and 2017’s ‘okay.’) saw the group compared to their idols in Paramore or Fall Out Boy with anthemic, heart-on-the-sleeve choruses that battled growing pains with unwavering optimism. 2018’s ‘The Great Depression’ was something off a left turn though. An aggressive, theatrical concept record told through the character of The Poet, it put the band in the same emo box as Twenty One Pilots or My Chemical Romance as they explored mental health with a little more depth than simply chanting ‘it’s ok not to be ok’. “People took us a little more seriously after that record,” explains Walters.

“We wanted to treat our fans with the respect they deserve. Yes, a majority are young and impressionable, but they are intelligent. They know when they’re being sold something that isn’t genuine,” he continues. “We just wanted to talk about mental health in a way that was true for us, and them.”

It was going to be followed up by an EP that the band started writing at the end of 2019, and were going to finish after tours of Europe, the UK and Australia. Lockdown had other ideas though. Instead of flying back out to Los Angeles, As It Is traded song ideas with producer Zach Jones over the Internet and soon found a virtual groove. Over the next year, that five song record expanded into an ambitious, rebellious full-length album. As the title suggests though, it wasn’t that easy.

“We’d be lying if we said we didn’t all contemplate ending the band countless times during the pandemic,” says Ronnie Ish. Between the release of ‘The Great Depression’ and the recording of ‘I Went To Hell And Back’, As It Is became a trio of Ish, Walters and longtime bassist Ali Testo.

Both departures have been amicable, people with different priorities after lockdown or chasing new dreams, but still, “things have changed,” admits Walters. Rather than seeing that as a negative, he views it as a reflection of the world we’re living in. “There has been no stable ground for anyone over the past two years.”

It was writing this record that kept As It Is together. “Every time someone had a wobble, we spoke about finishing this record, giving the fans what they deserve,” explains Ish. Now, they’re stronger and more determined than ever.

Walters believes that As It Is are still here because “there was more to say.” Yes, he questioned the future of As It Is but, as you can hear across ‘I Went To Hell And Back’, he questioned pretty much everything. “It hasn’t been easy. There have been a lot of battles, mainly with myself, but I’m proud of the outcome.”

Avoiding another concept record (“too predictable”), ‘I Went To Hell And Back’ is a sprawling collection of songs that explore the confusing, conflicting emotions of the past two years. “We’ve encapsulated the loss, grief, disparity, anxiety and depression on this record,” says Ish. “All we’ve ever wanted to do was to write records and to tour and we worked our asses off for years to make that happen. Then something completely out of our hands removed our ability to do those things, which left us in a dark place. We, like most people, struggled with our identities in the pandemic.”

“There’s no metaphor or poetry to hide behind in a lot of these lyrics,” explains Walters. “I needed to say things bluntly, and angrily, just because of how sad and hopeless I was feeling. For a long while, I was just trying to survive. If I got out of bed, that was a great day.”

Written back in 2019, lead single ‘IDGAF’ is one of the oldest songs on the record. “There’s always been a certainty with that song,” explains Walters of why they chose that burst of snarling nihilism for their comeback. Viewed by the band as “the next logical step following ‘The Great Depression’,” they wanted to offer a sense of familiarity going into this new era.

The record draws heavily from punk, rock and emo but songs like ‘I’d Die 1000x’ and ‘I’d Rather Die’ see As It Is lean into their pop and dance influences while the title track is a haunting, electro number. Written at a time where Walters was having such a hard time, he wasn’t even talking to the rest of the band or their producer, he used that song to tell them exactly what was going on with him. “It’s me saying ‘I’m not doing well’. Listening to it now, you don’t necessarily know that there are tears in the eyes of the person singing it, but it’s a really special song.”

Elsewhere there are tracks like ‘ILY, How Are You?’, written by Ish during one of those sessions where Walters was absent. “It’s about how we’re conditioned to tell people that we’re doing fine, even if there’s a storm going on in your head. Even your closest friends don’t know the exact demons you’re battling. It was my way of saying to Patty ‘I love you, how are you really, really doing?’”. Because they were working in different timezones (Walters and Testo in the UK, Ish and Jones in America) Walters woke up to the song, nearly finished. When Ish logged on the following night, Walters had sent him ‘I’d Rather Die’, a lyrically sombre song with an uplifting chord progression.

“This record means the world to us,” says Ish. “I truly believe we’ve done something magical. The pandemic took us the furthest we’ve ever been from each other, but now we’re the closest we’ve ever been. ‘I Went To Hell And Back’ put into focus what this band is, and what it means to us. It scrubbed the jadedness away that comes from relentless touring and losing band members.”

The album is about “growth and not losing sight of that faint glimmer of optimism,” Walters explains, before admitting “it’s not always easy.”

“As profoundly pessimistic as this record sounds on the surface, it isn’t all doom and gloom,” he promises. “Feelings like sadness and hopelessness will eat you alive if you let them. I hope this record is there for anybody feeling as lousy or as inadequate as I was. “

“I don’t relate to happy music – never have, never will,” he continues. “Sad music, it reminds you that you’re not alone. It isn’t going to fix things but sometimes it’s enough to know that other people understand”.

“We’ve never been a cool band” admits Walters, but As It Is are an authentic one. 2021 has seen guitar music return from the shadows and while the group were inspired by the success of Travis Barker, Yungblud, Machine Gun Kelly, Bring Me The Horizon, Halsey, Nothing, Nowhere and Kennyhoopla, ‘I Went To Hell and Back’ isn’t a nostalgic pop punk record. Sure, it’s full of catchy choruses, sugary melodies and pop excitement but rather than recreate what’s come before, As It Is are looking to push things forward. “We wanted to pay homage to what was, while also trying to create something new,” says Ish.

“It’s been a long time since there’s been this much excitement in the alternative scene. We’re excited to contribute but also, to put our own, unique stamp on things,” adds Walters. “There is a huge ambition with this band.”

Walters hopes ‘I Went To Hell And Back’ feels like “catching up with an old friend. We can talk about all the good and terrible things that have happened, and how we’ve grown from that. We’re not the same band and I’m sure our fans aren’t the same people they were last time we put out an album, but I hope they haven’t forgotten why we were friends in the first place.”

‘I Went To Hell And Back’ isn’t a safe record but As It Is are definitely a band you can rely on.

“We’re about to release the best record of our career and we’re going to tour the absolute hell out of it in 2022,” says Ish. “We don’t know what’s going to happen in the future and right now, I think the cool part is we don’t have to.”